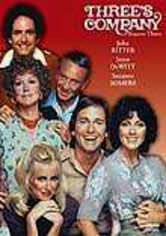 1978 NR 4 discs
Jack Tripper (John Ritter), Janet Wood (Joyce DeWitt) and Chrissy Snow (Suzanne Somers) are back for a third season of silliness and secrets (Jack's still pretending to be gay so he can shack up with the gals and save on rent). Throw in undersexed Mrs. Roper (Audra Lindley), her suspicious, prying husband, Stanley (Norman Fell), and ladies man Larry (Richard Kline), and you've got the makings of 23 hilarious episodes. See you at the Regal Beagle!