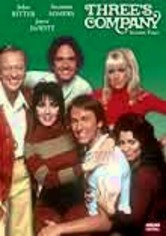 1979 NR 4 discs
Join lovable scoundrel Jack, spunky Janet, ditzy blonde Chrissy and the rest of the zany cast for another round of saucy innuendo, screwball slapstick and high-spirited high jinks. In the fourth season of the landmark comedy, Don Knotts makes his debut as Mr. Furley, landlord and self-proclaimed ladies' man. Special features include bloopers, behind-the-scenes commentary, and interviews in which cast and crew fondly remember the late John Ritter.