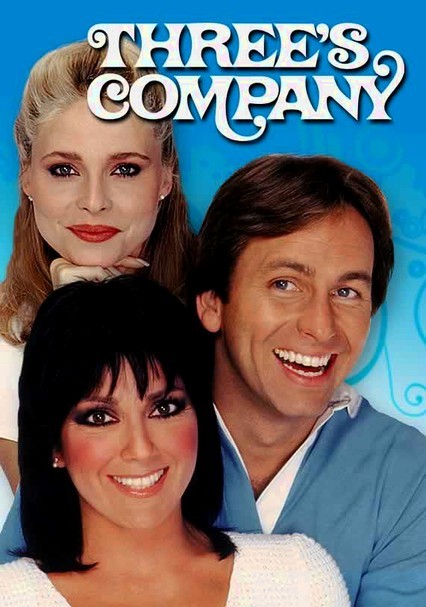 1977 TV-PG 5 seasons
Three affable young adult roommates -- Jack (John Ritter), Janet (Joyce DeWitt) and (for the first five seasons) Chrissy (Suzanne Somers) -- share the challenges and joys of single life in this breezy sitcom that was a hit from the moment it made its 1977 debut. The coed living arrangement compels ladies' man Jack to pretend that he's gay to hoodwink their prudish landlord (Norman Fell) -- later replaced by the foppish Ralph Furley (Don Knotts).

Slapstick and sexual innuendo abound in the second season of the wildly successful sitcom when Jack gets hired as a male model and learns he's expected to pose nude. Later, the roommates stumble upon some marijuana plants in the Ropers' garden.

Jack Tripper (John Ritter), Janet Wood (Joyce DeWitt) and Chrissy Snow (Suzanne Somers) are back for a third season of silliness and secrets (Jack's still pretending to be gay so he can shack up with the gals and save on rent). Throw in undersexed Mrs. Roper (Audra Lindley), her suspicious, prying husband, Stanley (Norman Fell), and ladies man Larry (Richard Kline), and you've got the makings of 23 hilarious episodes. See you at the Regal Beagle!

Join lovable scoundrel Jack, spunky Janet, ditzy blonde Chrissy and the rest of the zany cast for another round of saucy innuendo, screwball slapstick and high-spirited high jinks. In the fourth season of the landmark comedy, Don Knotts makes his debut as Mr. Furley, landlord and self-proclaimed ladies' man. Special features include bloopers, behind-the-scenes commentary, and interviews in which cast and crew fondly remember the late John Ritter.

Three's never a crowd when it's John Ritter, Suzanne Somers and Joyce DeWitt, who return for more screwball shenanigans and slapstick galore in the fifth season of the hit TV sitcom. Jack Tripper (Ritter) is frequently at wit's end in his unending battle to fool apartment manager Mr. Furley (Don Knotts) into believing Jack is gay so he can continue sharing digs with scatterbrained Chrissy Snow (Somers) and spunky Janet Wood (DeWitt).

In the final season of this phenomenally successful sitcom, eternal bachelor Jack (John Ritter) narrowly avoids tying the knot at the beginning of the season, only to find himself on his knee again by season's end. Meanwhile, Janet (Joyce DeWitt) and Larry (Richard Kline) pretend to be French; Jack and Mr. Furley (Don Knotts) get locked in a freezer; and more. Bonus material includes a tribute to Ritter and bloopers from the final three seasons.

Parents need to know that this still-hilarious '70s sitcom relies on sexual innuendo, silly physical humor, and monumental misunderstandings for its well-earned laughs. Throughout the series, Jack pretends to be gay so that his traditional landlords will allow him to live with two single women. There's no substantive negative commentary on homosexuality (though Jack sometimes camps it up a bit), but the masquerade is played for humor time and time again. The onscreen chemistry between Janet, Chrissy, and Jack (who fancies himself a ladies' man but rarely enjoys great luck with them) brings the subject of sexual attraction to the forefront, but the constant slapstick comedy keeps the tone light enough for family viewing with tweens. Even the innuendos seem pretty tame by today's standards; Chrissy's dumb-blonde shtick might raise more eyebrows among modern parents. Some kids might find the characters' constant mix-ups stressful.

A large portion of the show's humor is based on sexual innuendoes, strong flirting scenes, and misinterpreted signals between the sexes. But the mood is kept light to play up the laughs. Female characters dress in tight pants, short shorts, and clingy tops, and occasionally they're seen in lingerie. Men often gaze longingly at pretty women or mention to their buddies the attractiveness of a woman's features.

Physical humor includes tumbles, collisions, and a few slaps, but it's all for laughs and doesn't lead to injury.

The series reflects some of the values of the show's original 1970's era, including some sexist gender stereotypes and behaviors.

Several scenes either take place in the local bar (the Regal Beagle) and/or include alcohol, but drinking is reserved for the over-21 crowd.