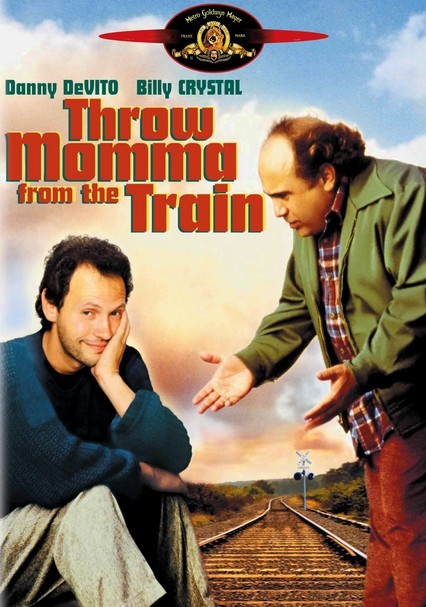 Parents need to know that Throw Momma from the Train, a hit dark comedy from the '80s, has violent and sexual content that makes it inappropriate for younger kids. Characters fantasize about and openly discuss murdering those who have made their lives difficult. There's slapstick physical comedy on the order of a character getting hit in the head with a skillet, hit in the crotch with a cane, and thrown out the back of a moving train. Characters freely discuss sex, and in one scene, two characters start to have sex on a couch, and their moans can be heard. Expect occasional strong language, too, like "f--k" and "s--t."

A couple has sex on a couch while an intruder spies. There is no nudity, but there are steady moans of pleasure. A man and woman start to kiss and decide they want to have sex in an outdoor town square train car, but get interrupted. During a creative writing class, one of the students turns in a story with the title "100 Girls I'd Like to Pork." Another student dismisses it as "whacking material."

In a fantasy sequence, a man dreams of stabbing his mother with a pair of scissors. The woman is later shown with the scissors going in one side of her head and sticking out the other. A man is hit on the head with a skillet. This man is hit in the testicles by an older woman with a cane. A car veers out of control when the brakes stop working. After several close calls, the car crashes into a tree; no one is injured. In another fantasy sequence a man strangles his ex-wife to death. A man is thrown off the back of a train and requires hospitalization afterwards.

Though couched in humor, the movie takes a rather negative view of women -- as nagging mothers and betraying wives. Larry's constant admonition that a "writer writes always" is good advice for aspiring writers.

A Pepsi can, and later, a Pepsi truck, is prominently visible.

A despondent writer drinks from a bottle of clear alcohol. Characters smoke. The writer celebrates the near-completion of his novel by smoking a cigar.