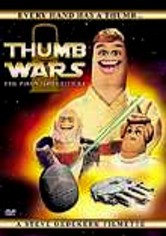 1999 NR 0h 28m DVD
Costumed thumbs play all the characters in this hilarious Star Wars parody. Loke Groundrunner and Oobedoob Benubi set off to rescue Princess Bunhead from the villainous Black Helmut Man and the Evil Thumbpire. Along the way, they team with mercenary pilot Hand Duet and his fuzzy sidekick, Crunchy. Steve Oedekerk, the comic genius behind such hits as The Nutty Professor and Ace Ventura: When Nature Calls, created and directed Thumb Wars.