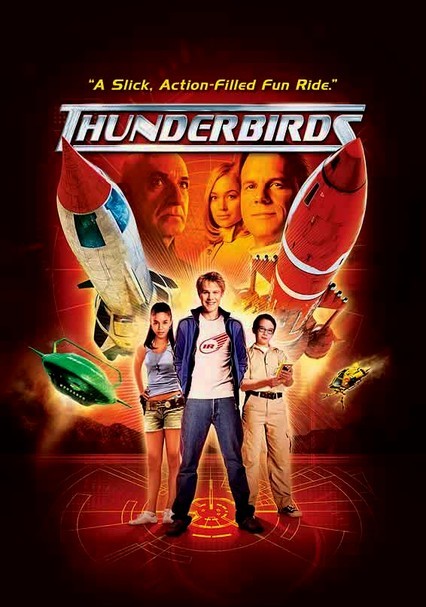 2004 PG 1h 35m DVD
The Thunderbirds, a high-tech secret force employed by the government, face off against their nemesis, who has landed on their island and is attempting a coup by using the team's rescue vehicles.

Parents need to know that Thunderbirds s a vibrant-hued action movie starring Bill Paxton as the leader of the Tracy family, aka the Thunderbirds, a secret group of heroes dedicated to righting wrong wherever they find it. Based on the 1960s TV series of the same name, the film features bombastic special effects and an exaggerated, cartoonish violence in the battle and fight scenes. There's lots of punching, kicking, and, in one instance, a double kick to the crotch of an antagonist. When antagonists cause damage to a monorail in London, innocent commuters are trapped in traincars at the bottom of the Thames River. There's major product placement, with Ford vehicles are prominently displayed, and the Ford logo is shown each time news reports of the action are presented on TV.

Cartoonish violence, with fights and explosions. Characters punch, kick, and throw each other. A space station nearly falls into Earth's atmosphere. Two characters kick an enemy in the crotch at the same time. When antagonists cause damage to a monorail in London, innocent commuters are trapped in traincars at the bottom of the Thames River.

Good triumphs over evil. It's one thing to say that you're old enough to handle responsibility, but something else entirely to prove it.

Ford vehicles and the Ford logo are displayed prominently throughout the film. When the film cuts to scenes of news reports, the report is sponsored by Ford.