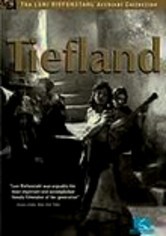 1954 NR 1h 34m DVD
Famed Nazi propaganda filmmaker Leni Riefenstahl returned to fictional works with this romance about a Spanish dancer who finds herself at the center of a love triangle. Riefenstahl plays the dancer, Marta, who must choose between a simple shepherd (Franz Eichberger) and a domineering nobleman (Bernhard Minetti). Though not released until 1954, the film was shot during World War II and some of the extras included concentration camp inmates.