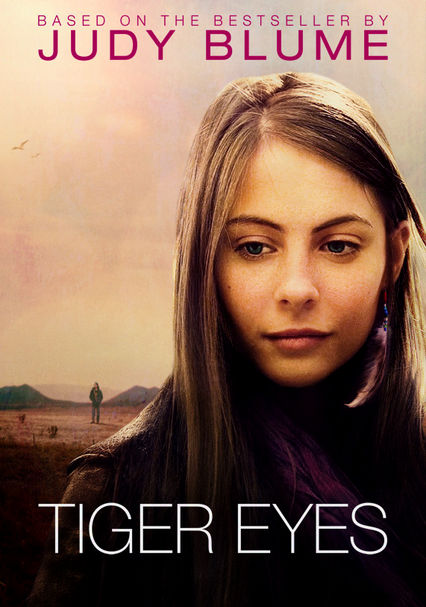 2012 PG-13 1h 32m DVD
Following her dad's murder, 17-year-old Davey goes to stay with relatives in New Mexico, while her mother tries to come to terms with her grief. While hiking a local canyon, Davey meets a young man who's destined to change her view of life.

Parents need to know that Tiger Eyes is an adaptation of Judy Blume's classic 1981 coming-of-age novel (and was directed by her son). Updated to the current time but otherwise faithful to the story, the movie chronicles the life of a teenager whose father was murdered at his shop. There's some violence, including a brief scene that briefly shows the father bleeding on the floor of his shop, and another scene in which an uncle slaps his niece on the face. A teenager (not the main character) drinks a lot and throws up a couple of times, and there are a few kisses, including one make-out session in the back of a car. A grieving widow takes a lot of pills to calm herself and sleep, and another father dies of cancer off screen. The movie encourages family support and unconditional friendship to get over even the saddest tragedies.

Davey has a romantic connection with a college-aged guy; after weeks of flirting and hiking, they embrace and kiss a few times. Jane asks Davey about how much "experience" she has with boys, and later Jane makes out in the backseat of a car with her crush.

An older man slaps his teenage niece on the face, a girl nearly passes out from drinking too much, and a man's murder/death (and its impact on his family) is discussed and referenced several times; he's briefly shown bleeding. A father dies in the hospital (off camera) of cancer.

A couple of uses of "ass" (said in jest) and one angry utterance of "a--hole" (said to an adult). An older uncle insults his dead brother-in-law and grieving sister-in-law by calling them a "waste of a life" and "useless."

The movie illustrates how families can overcome even the most traumatic tragedies, like the loss of a parent. Davey's journey also shows how, with time and emotional support, a teenager can deal with depression and grief.

Brands featured in the movie include Blue Bunny ice cream, Keen sneakers, Volvo, Jeep, Mac, and the board game Monopoly. The charity Heifer International and the books Beloved by Toni Morrison and Stuart Little by E.B. White are also discussed.

Underage drinking in a few scenes: Davey's friend Jane drinks to excess (mostly vodka) at least three times and vomits twice -- once in public and once at school. A grieving widow takes a lot of pills to calm herself and sleep.