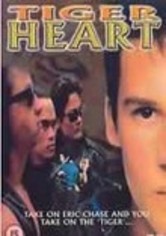 1996 PG-13 1h 30m DVD
Teenage martial artist Eric (Ted Jan Roberts) must put his summer of fun on hold to battle the bad guys in this high-powered action flick. Eric's vacation takes an unexpected turn when an unscrupulous land developer arrives in the neighborhood and starts harassing residents, including Eric's girlfriend. Now, he must risk his life to defend his neighbors from the strong-arm tactics of the developer, who's determined to turn their land into a mall.

Parents need to know that Two Bits and Pepper is a senseless, scary movie with many scenes that find children and horses in danger. Attempts at humor (frequent farting and cartoon-like villains) along with two likable talking horses cannot overcome the story's utter disregard for the seriousness of kidnapping and the fears that surround such an event. Two girls are stalked, chased, captured, tied up, held at gunpoint, and trapped in a burning house. Parents are depicted as misguided and stupid, neglecting to search the most obvious places for their missing daughter, leaving a child in the care of an irresponsible older sister, and having little self-control. Particularly deplorable is a lengthy sequence during which the audience is led to believe that the beloved pony is dying. The movie also has a few mild insults -- "butt," "jackass," "moron" -- and some smoking and drinking, and one instance of drunkenness leads to the death of a pony.

Lots of scary action: Strange men attempt to lure young children into their cars; a pony is shot and fights for his life with visuals of him on the ground bleeding and then undergoing a surgical procedure; a drunken cowboy drives his car into and kills the pony's mother (off-camera collision); cars crash; stalkers lurk around a house with two children alone inside; a pony is captured by cowboys hoping to sell him for meat; a policeman is knocked down and his car careens over a hillside; a house is set on fire with kids inside. One long sequence shows a bumbling but vicious kidnapper trying to get into a locked bathroom with two girls inside; he stabs at the door with a sharp tool puncturing the door so that he's getting closer and closer to them. Afterward, when the two girls are held captive, he ties them up and threatens them; a gun is brandished.

Parent-child communication and honesty is essential. Good triumphs over evil.

Villains smoke. In two scenes drunken cowboys drive vehicles; in one instance a pony is killed.