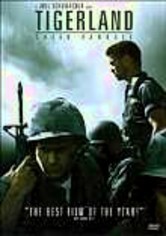 2000 R 1h 40m DVD
The system wanted them to become soldiers. One soldier just wanted to be human. Action master Joel Schumacher turns his lens on a platoon of soldiers en route to "Tigerland" for simulated combat training prior to their hitch in Vietnam. Bozz (Colin Farrell) is the one man standing between the troops and the army, but his plan to avoid combat by getting kicked out of the Army backfires when his renegade ways are seen as a sign of strength.