Tigers of the Sea 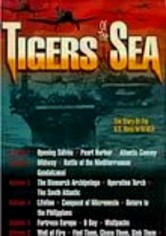 Tigers of the Sea

2001 NR 2 discs
Revisit some of the U.S. Navy's most important battles and dramatic victories during World War II, when control of the oceans was critical, in this historical documentary compiled from authentic newsreels and archived footage. The film captures the feeling of combat on the high seas, including the Battle of Midway, the Navy's response to the German submarine "wolf packs," the Micronesia campaign, the fighting in the Mediterranean and much more.