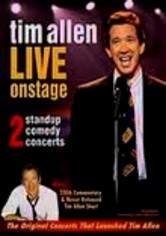 2006 NR 1h 10m DVD
Before television made Tim Allen a household name, his average guy persona made him a star headliner on the stand-up comedy circuit. His groundbreaking routines crossed the barrier between the sexes, appealing equally to men and women. This hilarious video collects two of his most hysterical concerts, "Men Are Pigs" and "Tim Allen Rewires America." Bonus material includes commentary, an interview with Allen and the brand-new short "Docu-Comic."