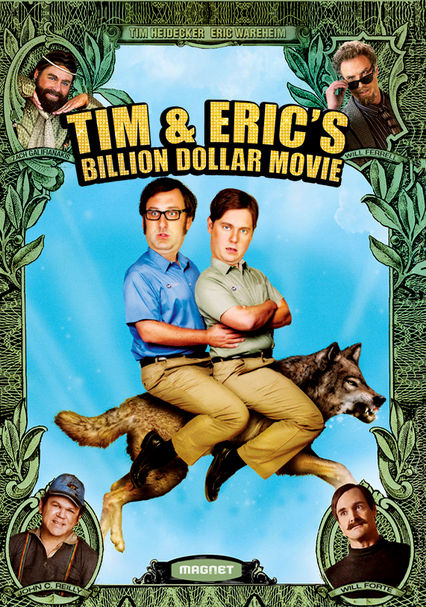 Parents need to know that Tim and Eric's Billion Dollar Movie -- directed by and starring Tim Heidecker and Eric Wareheim, who are best known for their successful TV show -- is extremely violent, vulgar, and sexual. There's some strong, gory, bloody violence (some directed at old ladies), as well as an extended "sex" scene (clothed but graphic) and a child's kidnapping -- all of which is played for laughs. There are other sexual situations and innuendoes, a montage of binge drinking and hard drug use, and constant foul language, including countless uses of "f--k," "s--t, "c--t," and more. The main characters are fairly hateful and serve no real purpose. Though the average moviegoer is likely to find the film completely unfunny and highly irritating, Tim and Eric's most loyal fans could enjoy it, if they're "mature" enough for the decidedly immature content.

There's an extended "comical" sex scene with many cartoonish positions and use of sexual devices (though no nudity). A man gets his penis pierced; the full penis, though obviously fake, is on display. Some scenes take place in an "adult toy" store, with various devices shown in the background. Two men bathe together in one scene. One man masturbates (under the covers) while in bed with the other. Suggestive dancing in a bar. Strong sexual innuendo throughout.

Trying to get their money back, tough movie moguls torture two old ladies, beating them up and severing a finger -- there's spurting, gushing blood. A man is attacked by a wolf. A bloody showdown at the climax features explosions, weapons, and beheadings. A character is covered in diarrhea. Many characters die horrible, gory deaths, and a child is kidnapped. All of this is played for laughs.

The movie's main theme is money and success at any cost. There's a tiny, sporadic sense of pride in a job well done, but mostly the focus is power, success, and greed.

In an early scene, the two main characters decide to get "wasted." In a montage sequence, they drink heavily, snort cocaine, smoke hashish, etc. Later, Tim slips Eric a drug that's supposed to be "Spanish Fly" but instead sends him on a psychedelic trip.