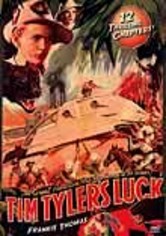 1937 NR 2 discs
When his scientist father (Al Shean) turns up missing, young adventurer Tim Tyler (Frankie Thomas) stows away on a steamboat headed for Africa, where he meets a young woman (Frances Robinson) searching for the villain who framed her brother. As it turns out, the bad guy -- an ivory thief by the name of Spider Webb (Norman Willis) -- is the same man who's holding Tim's father captive. But will they get there in time to save his life?