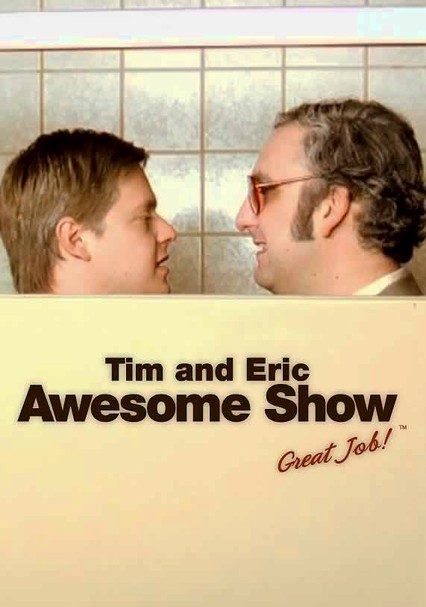 This offbeat comedic variety show from the Cartoon Network's Adult Swim block is written by and stars duo Tim Heidecker and Eric Wareheim in a series of bare-bones, DIY-style sketches, parodies, animated shorts and musical numbers. A number of talented guests get in on the wackiness in each briskly paced 11-minute episode, including the likes of Bob Odenkirk, Weird Al Yankovic, Zach Galifianakis, John C. Reilly and many more.

Brazen madmen Tim Heidecker and Eric Wareheim are back for another season of their hit show that combines sketch comedy, faux commercials, goofy pranks and other mayhem. This time around, Eric shows off Tim's naked baby picture, Eric loses his memory, Tim has an evil doll crafted in his image, and Eric's new friend Raz comes between the two pals. Rainn Wilson, John C. Reilly, and Weird Al Yankovic join in the fun.

Fearless funnymen Tim Heidecker and Eric Wareheim return with another helping of offbeat humor in these episodes from their quirky variety show, including a sketch in which the pals' longtime friendship hits the skids. Other highlights include "C.O.R.B.S.," in which Cops On Recumbent Bikes take on terrorists, and "Chan," which features a tribute to Jackie Chan as only they could do it. Look for guest appearances by stars such as John C. Reilly.

Tim Heidecker and Eric Wareheim come blazing back with the fourth season of their off-the-wall comedy show, which takes phony infomercials, goofy sketches and other bizarre comic bits and stirs them into one big steaming stew of funny. This year the boys take a road trip to Florida, play tennis, mess around with Eric's anatomy and much more. Watch for guest appearances by Michael Ian Black, Jonah Hill, Fred Willard, Will Forte and Josh Groban.

Tim Heidecker and Eric Wareheim are back for a fifth season of their unpredictably "awesome" sketch comedy show, doing a great job, as per usual. But they're also treading into new territory with a holiday-themed Christmas special.