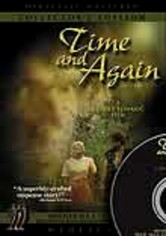 2005 NR 1h 0m DVD
Convicted murderer Bobby Jones doesn't have much time. He's serving a 30-year sentence for a crime he doesn't remember committing, and he's determined to find the real killer. After a daring prison escape, Bobby realizes he's been transported back to July 14, 1958 -- the day of the murder. With only six hours to reconstruct the past and find the person who ruined his life, he's on track ... until a beautiful distraction gets in his way.