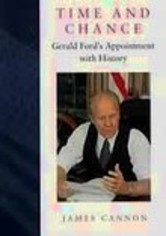 2006 NR 1h 0m DVD
Gerald Ford, the nation's 38th president and the first never to have been elected to the executive branch, is often remembered as the man who replaced disgraced President Richard Nixon. But as this biography reveals, he also held the nation together in some of its darkest years. From 1974 to 1977, Ford overcame series of stiff challenges, including the painful aftermath of Watergate, a disastrous war and a weak domestic economy.