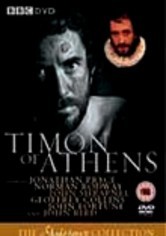 1981 NR 2h 8m DVD
Jonathan Pryce, Norman Rodway and John Shrapnel star in this BBC production of Shakespeare's play about wealthy Athenian Timon, who lavishes his fortune on friends and acquaintances. When Timon's bank account runs dry and his so-called friends turn their backs on him, Timon comes up with a plan for revenge. Bandits, prostitutes and a cave filled with gold come into play as Timon tries in vain to settle the score with those who betrayed him.