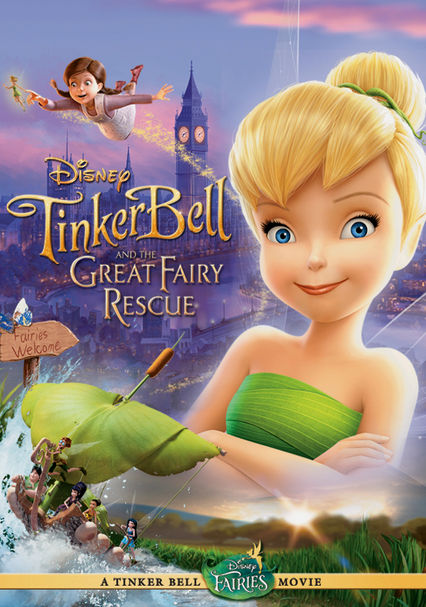 2010 G 1h 17m Blu-ray / DVD
When a clever young girl traps Tinker Bell and holds her captive, the other magical fairies must launch a daring rescue mission to set her free. But as Tink anxiously waits for her friends to arrive, she unexpectedly befriends her captor.

Parents need to know that this sweet fairy story has several tense scenes in which main characters seem to be in peril. But everything always works out in the end, and there's enough humor to balance the tension. In one scene, a parent wrongfully accuses a child of lying -- and the resulting tears might upset some sensitive kids -- but the emotional scenes aren't too drawn out.

Several tense scenes, including Tinker Bell and another fairy getting caught by humans. A cat threatens Tink and, later, other fairies. A group of fairies travels through a dark thunderstorm, once crashing dramatically and later almost getting hit by a car.

"Faith, trust, and pixie dust," is the message repeated by the fairies as they muck through the (literal) mud to help their friends. Plus, the movie supports the idea that parents should encourage kids' imagination and creativity and find ways to spend time with them despite busy schedules. There's also a solid message of girls being strong and resourceful (with a few girly stereotypes thrown in).

Tinker Bell and Disney are huge brands with merchandise nearly everywhere. There's a line of Pixie Hollow products (dolls, toys, etc.), a website, a video game, a book series, and even a magazine. The DVD package comes with coupons and a booklet of other products. Trailers promote Tinker Bell merchandise.