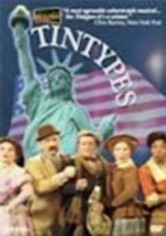 1982 NR 1h 48m DVD
Director Ken Butler takes you on a nostalgic trip back to the early part of the 20th century -- an era before records and rock 'n' roll -- when sheet music and song-pluggers set the scene for America's hit tunes. Based on the Off-Broadway show that won several Obie Awards, Tintypes is a red, white and blue look at the beginnings of a pop culture that today would be considered "very old school."