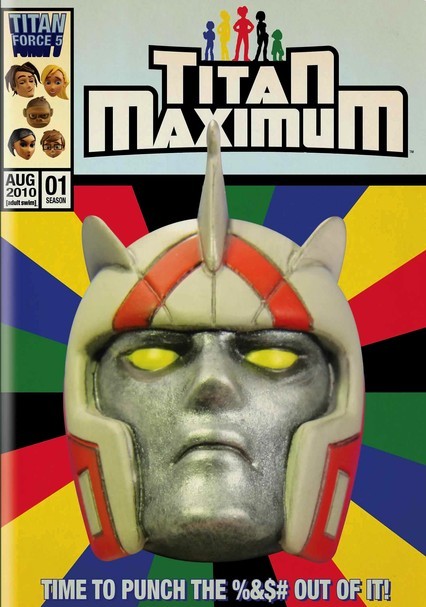 Parents need to know that this animated parody from the creators of Robot Chicken of early sci-fi kids' shows like Thunderbirds is aimed more at the adults who watched the original programs than at today's young viewers. Like the earlier shows, Titan Maximum centers on a group of daring heroes -- but in their down time, these heroes are rude, crude party animals. They drink to excess, swear like sailors, sleep around, and bicker with each other. Consequently, the show hass plenty of swearing, drinking, drugs, and sex, as well as some fairly explicit animated violence. It's funny, but for grown-ups only.

Numerous, explicit references to sex and sexuality. One female character dresses provocatively and is very clear about her desire for frequent coupling. She's derisive about another woman who's more selective and much more chaste. Some scenes show the animated characters kissing ... and imply much more. Characters often make explicit references to sex, including one who wants to "cornhole some Martians" and another who hopes to get a glimpse of some "side boob."

Several scenes feature close-ups of gory violence, including heads being blown up, people being stabbed, etc. Though the show's animated style makes these scenes seem less real, they do include gobs of blood and guts spilling from various body parts. There are also plenty of animated battle sequences featuring giant robots, blasters, etc. These clashes are noisy but not especially intense.

Frequent and crude, including "dick," "ass," dumbass," "butt," and "a--hole," as well as some creative insults that won't alert network censors but will probably raise parental eyebrows. Also expect frequent use of the middle finger.

The show is a parody of classic early sci-fi shows for kids featuring teams of earnest, wholesome heroes. These characters are just as brave and willing to risk death, but when they're off duty, they're anything but pure (they drink heavily, sleep around, and bicker like little children). Heroes, it seems the show is saying, need not be overly moral in their downtime if they can still do their duty when called upon.

Some characters drink heavily and are shown drunk, sometimes to the point of vomiting. Several scenes are set in bars and nightclubs, featuring plenty of liquor.