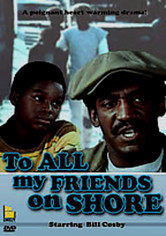 1972 NR 1h 10m DVD
Bill Cosby not only starred in, he also produced and scored this touching TV movie about a middle-aged airport redcap (Cosby) whose struggles to obtain a better life for his family are complicated when his son is diagnosed with sickle-cell anemia. Dennis Hines and Gloria Foster co-star, and Allan Sloane won an Emmy for his adaptation of Cosby's original story.