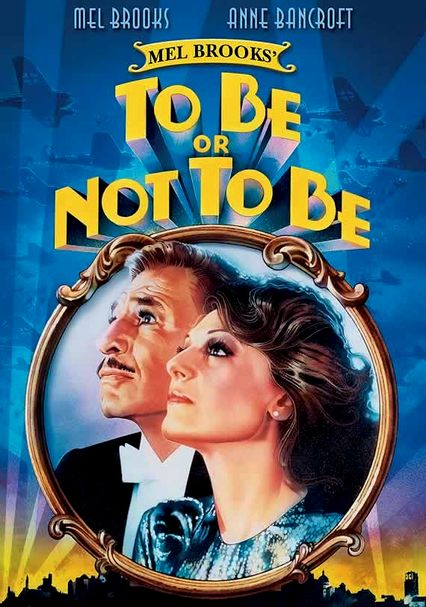 1983 PG 1h 47m DVD
Mel Brooks and his real-life spouse, Anne Bancroft, star as impresarios of a Polish acting troupe circa 1939. When the Nazis invade Warsaw, the ensemble gets enmeshed in a subterfuge to prevent the Germans from finding a list of underground fighters. Bancroft scored an Oscar nomination, as did Charles Durning for his supporting performance as a befuddled Nazi colonel in this zesty remake of Ernst Lubitsch's 1942 classic.

Parents need to know that To Be or Not to Be is an over-the-top farce that makes light of usually dark themes like adultery, WWII, and Nazis. There's quite a bit of adult innuendo (though no real sexy stuff is shown), and some goofy violence that isn't very graphic. Although it's a silly comedy, there are some intense scenes and themes that make the film best for older tweens and up.

No nudity or actual sex scenes are shown, but adult relationships, including adultery, are central to the plot. One of the main characters creates an elaborate plan to have an affair with a pilot, and they're shown kissing and embracing. There's also quite a bit of sexual innuendo around their planned affair. There's also a very stereotypical portrayal of homosexuality and some semi-racy dance costumes.

There are several scenes that use old footage from WWII showing the destruction of war. One character is taken by the Gestapo and shown later with a bruised face. Two characters also shoot at each other and one is killed, though his death is behind the scenes and there's no blood or graphic violence shown. His body later shows up in multiple scenes, though it's used in a comedic way and isn't graphic.

While there's no swearing in the movie, Frederick does use a gay slur in the line "Without Jews, fags, and gypsies, there is no theater." A Nazi soldier also refers to a gay character as a "sissy."

Although the film is a slapstick comedy, it beautifully captures the message that no one should be persecuted based on their religious beliefs, sexual orientation, or lifestyle. This is best illustrated when one of the characters delivers a version of Shylock's speech from Hamlet to "Hitler" (being impersonated by Mel Brooks): "Hath not a Jew eyes, hath not a Jew hands?"