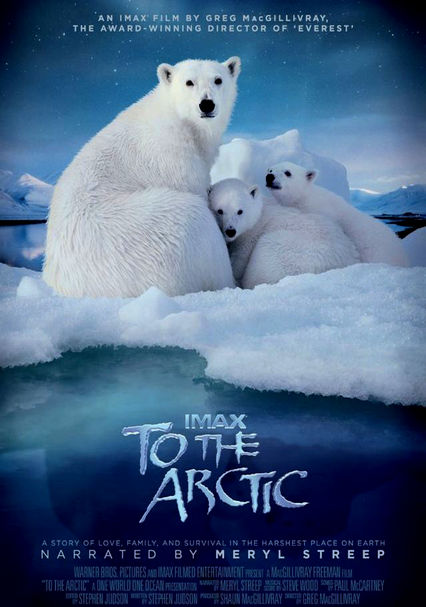 2012 G 0h 40m Blu-ray / DVD
Meryl Streep narrates this touching chronicle of a mother polar bear and her 7-month-old cubs, who band together to survive the Arctic wilderness amidst an array of snow-white challenges.

Parents need to know that To the Arctic is an educational 3-D nature documentary about the animals that thrive in the world's harshest climate. Filmed in IMAX, the movie puts a special emphasis on polar bears and the plight they face as global warming continues to extend the arctic summer season. There's nothing objectionable in the documentary, but some very young kids might be disturbed by the tense scenes when a male polar bear pursues a mother and her cubs or when the white cubs get bloody from eating freshly hunted seal meat. The narrator also explains that some cubs and caribou newborns have died because of the elements or starvation. Since the documentary is only 45 minutes long, it's just the right length to educate and entertain kids about life in the arctic's frozen world.

Caribou give birth along a migration trail. Talk about male polar bears during mating season.

There are a few scenes of peril and suspense as a predatory male polar bear is in pursuit of a mother polar bear and her two cubs. Also, the narration explains that baby caribou born during the migration usually don't make it to their destination and that a baby polar bear wasn't able to withstand the long distance its mother swam to look for food. A seal is caught and shared between a mother and her cubs, but audiences only see glimpses of the meat and the bloodstained bears.

The movie's overall message is to pay attention to climate change and how global warming is affecting the polar bears and other animals that call the arctic their home. Without a human push to curb the effects of global warming, the animals will be wiped out sooner than we can imagine.