To the Moon: Nova 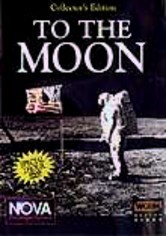 To the Moon: Nova

1999 NR 2h 0m DVD
The mission was impossible. The odds were astronomical. The results were spectacular. "Nova" shares the fascinating inside story behind "one giant leap for mankind." This expanded two-hour special shares vivid recollections of astronauts and legendary flight directors, as well as many of the unsung heroes of the Apollo missions. Rare interviews and amazing footage capture America's full-throttle effort to be the first to the moon.