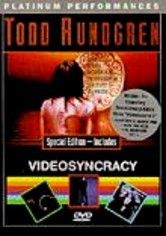 1993 NR 1h 22m DVD
Get a glimpse inside the head and heart of one of the great songwriters and musical innovators of the 20th century in this self-directed self-portrait. The interview included here poses deep, philosophical questions of the musician, exposing Rundgren's weaknesses (namely arrogance) as well as his strengths. Songs include "Pulse," "Too Far Gone," "Hello It's Me," "I Saw the Light" and "Breathless."