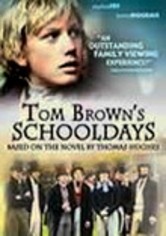 2005 NR 1h 33m DVD
Alex Pettyfer stars as the titular Tom Brown in this BBC adaptation of Thomas Hughes's classic novel, a tale about bullies, heroes and courage set in 19th-century England as Tom moves through his adolescence as a student at the Rugby School for Boys. He must learn to stand up for himself against an imposing set of obstacles, including ridicule from his teachers and his classmates. Stephen Fry plays the reform-minded new headmaster

Genres
Drama, Period Pieces, Coming of Age, Dramas Based on the Book