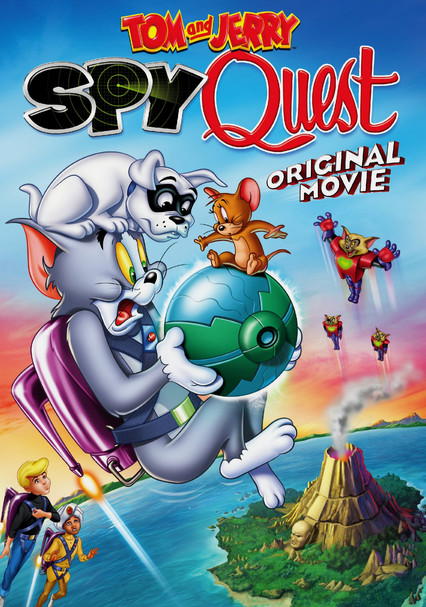 Parents need to know that Tom and Jerry: Spy Quest unites the combative cat and mouse with another of Hanna Barbera's cartoon mainstays: Jonny Quest and his entourage, which includes Jonny's scientist dad, Dr. Benton Quest, hero Race Bannon, and sidekicks Hadji and Bandit the dog. Though some of the Tom and Jerry movies are comic parodies of fairy tales and other cultural phenomena, this movie is strictly "good versus evil," moving its characters from one action sequence to another. Tom and Jerry stop tormenting and smashing each other just long enough to assist Jonny and company in their efforts to stop the ever-evil Dr. Zin from taking over the world. There are enough exaggerated cartoon explosions, falls, hits, battles, narrow escapes, and scary creatures to completely fill the 73-minute viewing time. It's all meant to be funny, with a few jokey stereotypes (villainous Asian scientist, wily and flirtatious temptress) included as well. The movie is best for kids who are comfortably able to distinguish real peril versus comic-cartoon jeopardy.

Good triumphs over evil. Tom and Jerry put their usual hostility aside and work as a team to thwart villains. Some stereotypes.