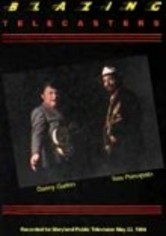 1984 NR 0h 45m DVD
Blues guitar virtuosos Tom Principato and Danny Gatton offer up an inspired session as they jam on both their own compositions and the songs of others in this impressive 1984 performance filmed for Maryland Public Television. Songs include "How's Your Sister," "Tom's Samba," "7 Come 11," "Breakin' Even," "In a Dream," "Back at the Chicken Shack" and more. Bass player John Previti, keyboardist Mike Sucher and drummer Tony Martucci also appear.