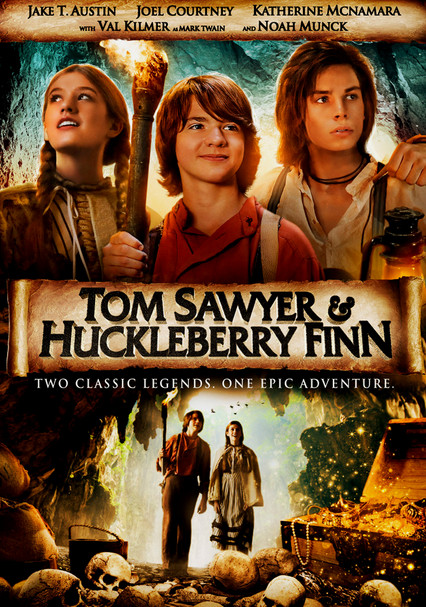 2013 PG-13 1h 31m DVD
American author Mark Twain narrates his tale of 1850s boyhood pals Tom Sawyer and Huck Finn, whose uncommon experiences include witnessing a murder and then having to decide whether to prevent an innocent man from being hung for the crime.

Parents need to know that Tom Sawyer & Huckleberry Finn (2014) is a live-action reimagining of Mark Twain's classic novel. After witnessing a murder in the town graveyard one late night, young teens Tom and Huck embark on a series of adventures and misadventures as they protect themselves from the killer, find a buried treasure, and fall in love (well, one of them does). Suspense and violence accompany the intrepid boys' odyssey: a shooting, a stabbing, chases, narrow escapes, and more. Though the boys are fearless, dishonest mischief-makers at the onset, they learn important lessons about integrity, responsibility, and justice. There is some adult drinking and drunkenness, and Huck smokes a corncob pipe. Filmmakers have made an effort to avoid controversy by leaving out racial epithets found in Twain's spirited novel. There is mild profanity ("hell" and "damn").

Tom has a crush on Becky Thatcher, hesitantly kisses her.

Tom and Huck endure lots of scares and danger: They watch from the shadows as a man is stabbed to death; are chased by a vengeful villain on foot and on horseback; get lost in a cave; are held at gunpoint. Tom is choked in a dream, attacked by bats, and sees a villain throw a knife and shoot a man. Bodies and skeletons appear, sometimes startling the heroes.

Sometimes being honest takes great courage. It's important to admit mistakes and learn from them. Being eager for adventure and disobeying rules can lead to unexpected danger.

Young teen Huck smokes a corncob pipe in several scenes; Tom takes a puff once. References are made to several adult males as "drunks." A man referred to as a drunk is accused of murder. A celebratory scene shows townsfolk drinking and being drunk.