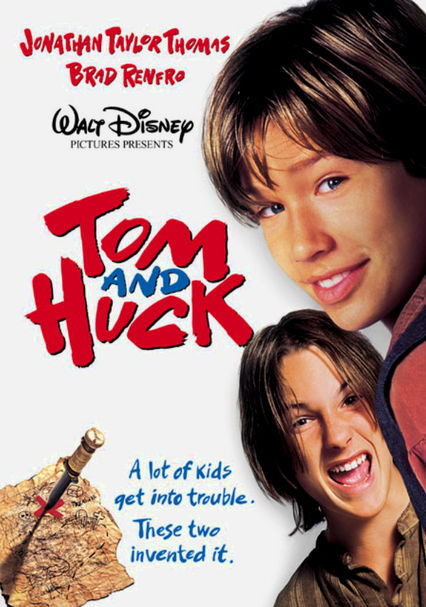 1995 PG 1h 32m DVD
Mark Twain's classic tome about life on the Mississippi River gets an energetic Disney treatment here with Jonathan Taylor Thomas and Brad Renfro in the titular roles as the legendary troublemakers in Hannibal, Mo. Watch as the incorrigible duo try to steal a treasure map from the pocket of the treacherous "Injun Joe" in order to save an innocent man's life. Rachael Leigh Cook co-stars as Tom's love interest, Becky Thatcher.

Parents need to know that while Disney toned down Mark Twain's story, there are mature social themes here, including: references to a father beating his son; an oblique comment about a man who ran away from the Civil War; folk superstitions such as curing warts with a dead cat in the graveyard; the difficulty an aunt faces in raising her orphaned nephews; whippings as punishment for misbehaving children; an alcoholic who is suspected of murder; poor "river folk" who travel the Mississippi looking for work; and, a Native American as a cold-hearted killer. 'Parents should be aware that two characters are killed (non-explicit, but very threatening scenes), that a staggering drunk is framed for a murder, that an adult hits kids and threatens to kill them, and a boy refers to being beaten by his father. There is a funeral for a character who is thought to be dead as well as a near-lynching of a man suspected of murder. Scenes of peril include children being chased, a bible used as a defense against a knife attack, and a dream-sequence of a character in danger. Adults are unable to protect children, and children sneak away from home with references to running away.

Name calling, including another word for a male donkey.

Discussion of loyalty and greater good, "mob" behavior depicted but cooler heads prevail, character who is poor and lives in shack is excluded until he proves himself to town.

Barroom drinking, tobacco smoking, one character drinks to excess and is known as the town drunk. This character gets into extreme peril because of his drinking.