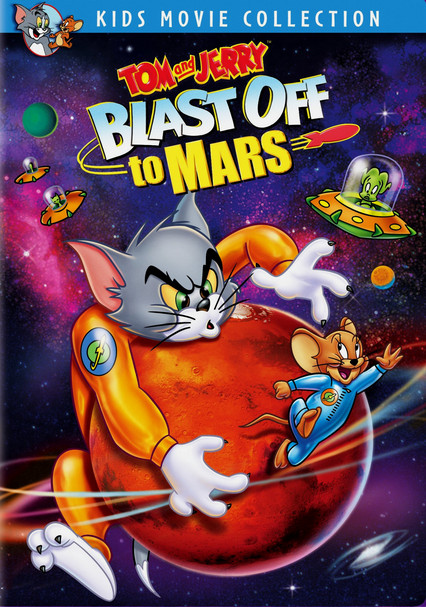 2004 NR 1h 15m DVD
The zany cat and mouse duo takes off on an intergalactic adventure in this animated film. A spaceship is destined for Mars, and Tom and Jerry have stowed away on the vehicle, eager to join the hullabaloo. Upon landing, though, they realize there's much more to the planet than rocks and landscape: Martians are plotting to invade the planet Earth, and the pair must put a stop to their plans.

Parents need to know that Tom & Jerry: Blast Off to Mars includes the typical slapstick in this mission to Mars. Chases and explosions follow falls, crashes, and every possible physical disaster from which the characters immediately recover. The story's villains are all portrayed with humor; there's never anything truly frightening for kids old or mature enough to understand cartoon violence. The usual messages about teamwork and courage are intact, as are the stereotypical human nitwits. In a rare departure for this franchise, a young female Martian joins with Tom & Jerry to end the threat from outer space invaders and save the day.

Traditional Tom & Jerry mayhem throughout. Characters fall, slip, are burned, ironed, dunked, vacuumed, folded, melted, turned into ash, dragged, smashed, exploded, and smacked. Buildings are flooded, burned, and frequently collapse. No one is permanently injured or killed; everyone appears to be back in fine form usually after only seconds. The villains are never scary and there's no real suspense.

Putting aside differences and working together helps accomplish goals.

There is one clear reference to The Jetsons, another Hanna-Barbera franchise.