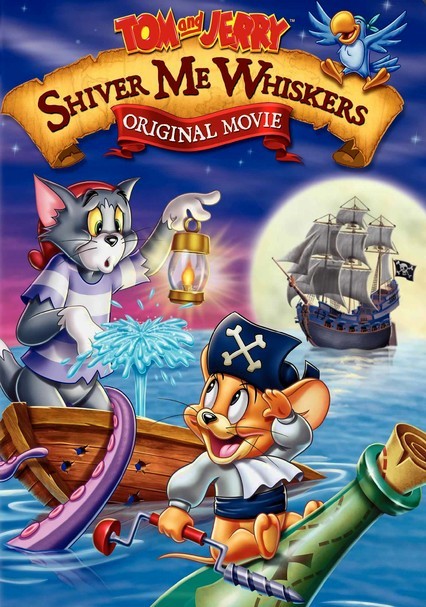 2006 NR 1h 11m DVD
Dueling cat-and-mouse team Tom and Jerry hit the high seas on a hunt for buried treasure in this pirate adventure. The tale begins when crew member Tom sets sail with an infamous pirate and finds a treasure map along with stowaway Jerry. The furry swashbucklers race to a deserted island where X marks the spot, but along with battling each other, they must outwit ruthless buccaneers, angry monkeys and a giant octopus to strike it rich.

Parents need to know that this full-length straight-to-DVD Tom and Jerry feature combines their typical slapstick violence with pirate antics (sword fights and cannons) and a few scares from skeleton pirates and a glowing skull who doesn't want to part with his treasure. Everyone -- pirate and animal -- is out to get the treasure for themselves but it's obvious that they'd have much more success working together and that there's plenty of treasure to go around.

There's the typical slapstick violence where Tom and Jerry give chase, are crushed, pummeled, shot from a cannon, nearly engulfed in lava, fly through the air sling shot-style from ship to ship, get chased by big creatures (a giant squid, a toothy shark, an equally toothy bulldog, even a giant rooster made of rocks), and engage in sword fighting with the rest of the pirates. Then there's the scary stuff with a talking, evil-laughing skull head taking Tom and Jerry to the booby trapped treasure; plus skeleton-pirates take over a ship, the live crew fleeing in terror on a lifeboat. One skeleton pirate removes his head to bowl over enemies.

Greed turns pirates Tom and Jerry against one another, but it becomes obvious that Tom and Jerry have much more success working together.