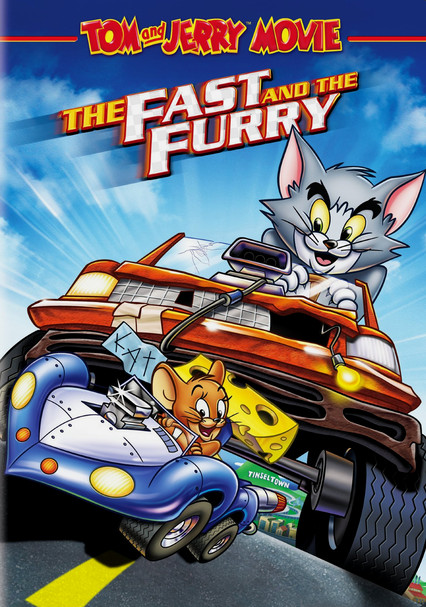 2005 G 1h 15m DVD
After hearing about an extreme event called the "Super Race" that offers the winning driver the mansion of his dreams, famed cat-and-mouse duo Tom and Jerry fasten their seatbelts and put a variety of high-speed vehicles to the test.

Parents need to know that Tom & Jerry: The Fast and the Furry contains the usual non-stop cartoon violence that is standard for the franchise. Characters barely survive one comic onslaught before they're flattened again -- all without serious injury or pain and with no real scares. Conceived as a parody of reality television competitions, the movie is one long car race with each contestant hoping to "eliminate" the others and take home the big prize. Jerry hangs from a bra; the Statue of Liberty loses her robes; and the words "keester" and "butt" are heard.

Jerry uses a woman's bra as a parachute. The Statue of Liberty loses her robe and is left in underwear.

Slapstick action from start to finish. A cat-and-mouse chase, a crash down stairs, a remote-powered airplane assault with dangerous jet blades, a plane sets fire to a house, characters sail through glass window, and Spike pounds Tom into the ground, then chokes him... and that's all in the first two minutes. No injuries, nothing truly scary, but characters are frozen, flattened, pummeled, swallowed by a whale, attacked by sharks, a stink bomb, a falling house, and a punching kangaroo. Among other cartoonish perils, they sink in the sea and in quicksand, fall from a bridge, go over a waterfall, and teeter on the edge of a cliff before plummeting down.

Despite their usual antagonism, Tom and Jerry briefly work together to achieve a goal.