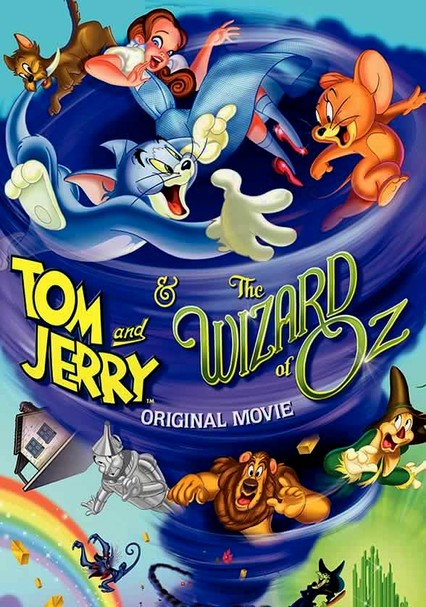 2011 NR 0h 59m DVD
The classic cartoon cat-and-mouse team is swept into an old but new world in this recasting of The Wizard of Oz, with familiar characters Dorothy, Toto and the Tin Man on hand to follow the yellow brick road with Tom and Jerry.

Parents need to know that this crossover movie between Tom and Jerry and The Wizard of Oz plops the classic Hanna-Barbera duo into the story of Dorothy's landing over the rainbow. Like all Tom and Jerry cartoons, you can expect loads of slapstick, cartoonish violence, here with a bit of added creepiness thanks to the Wicked Witch of the West and her flying monkeys. But because Tom and Jerry have to band together to rescue Dorothy, there's slightly less antagonism than in their other cartoons -- plus more musical numbers to lighten the mood.

The Wicked Witch of the West and her flying monkeys are always creepy, whether live-action or animated. The monkeys grab Dorothy and most of her friends. Tom, Jerry, and the munchkin mouse take a spiked mace, a wrench, a baseball bat, and a pistol as they walk toward the Witch's lair. Tom and Jerry are famous for their cartoonish violence, and the slapstick is in nearly every scene. The duo injures each other (almost always it's Tom who gets hurt) in various ways. Usually Tom is crushed with falling objects, falls off ledges, or gets hit all over his body. In one seat-jumping moment, Tom is swallowed by an alligator. The Witch melts in a much longer death scene.

The movie's overall message is one of teamwork and collaboration, albeit slightly skewed because of how often Tom and Jerry try to hurt each other. Still, even the antagonistic Tom and Jerry work together to rescue Dorothy and their new pal Tuffy.

Obviously this movie is a way of showcasing many classic MGM/Hanna-Barbera cartoon characters: Tom and Jerry, Spike and Droopy, and more.