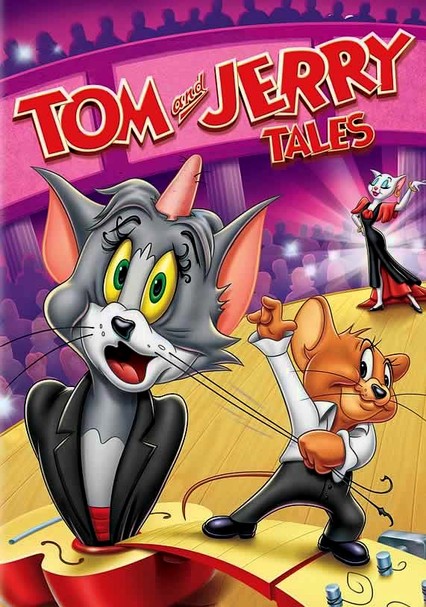 2006 TV-G 6 seasons
The famed cat-and-mouse duo thrill new audiences with their frantic chases and wild schemes, with Tom's single-minded efforts to catch the roguish Jerry, who makes a grand sport of humiliating his feline pursuer.

The classic rivalry of Tom and Jerry, cartoon land's most popular cat-and-mouse team, is updated for a new generation with the first new shorts in more than 30 years. The fur-raising chases, narrow escapes and outrageous slapstick continue in 12 episodes of the new series. The hectic high jinks include "Medieval Menace," "Fire-Breathing Tomcat," "Digital Dilemma," "Treasure Map Scrap" and more.

There's never a dull moment for Tom and Jerry in this 15-episode collection of the updated cartoon classic as the dynamic cat-and-mouse duo spars in space, gets chased by an Egyptian mummy and makes friends with dinosaurs. Stories include "Fraidy Cat Scat," "Martian Mice," "Dino-Sores," "Tomcat Superstar," "Freaky Tiki," "Beefcake Tom," "The Cat Nebula," "Spaced-Out Cat" and "Bats What I Like About the South."

The chase is on in these 12 cartoon shorts from Warner Brothers' popular cat-and-mouse series. In the seven- to eight-minute episodes collected here, Tom is forever on Jerry's tail -- and forever just a little too slow to catch him -- as he pursues the rapid rodent across the globe in a chase that takes them from a sultan's palace to the jungles of Africa. They even acquire superpowers in three of the episodes.

Everybody's favorite cat-and-mouse rivalry is updated for a new generation in this collection of animated shorts featuring the cute and cunning Jerry, who time and again outwits the ever-hopeful Tom, this time on skateboards, dirt bikes and more. Adventures include surfing in "Endless Bummer," a hunt for elusive prey in "Sasquashed" and a meeting with legendary monster hunter Van Helsing in "Monster Con."

Follow the madcap high jinks of Jerry the mouse as he outwits and outruns the clutches of Tom the cat in this collection of 15 adventures from the updated animated series, including "Kangadoofus," in which Jerry hides out with a family of marsupials. Other episodes include "The Declaration of Independunce," "The Abominable Snowmouse" and "24 Karat Kat," in which Jerry must thwart Tom's plan to raid his prospecting claim during the gold rush.