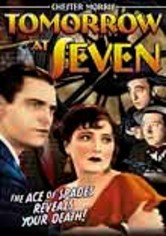 1933 NR 1h 2m DVD
Talk about heightened anticipation: The stalking murderer in director Ray Enright's classic thriller starring Chester Morris and Charles Middleton is thoughtful enough to let his intended victims know in advance that their time is running out. With every warning, the killer spreads fear in the town he's terrorizing. But the cops and crime novelist Neil Broderick (Morris) are on the assassin's trail … and getting closer by the minute.