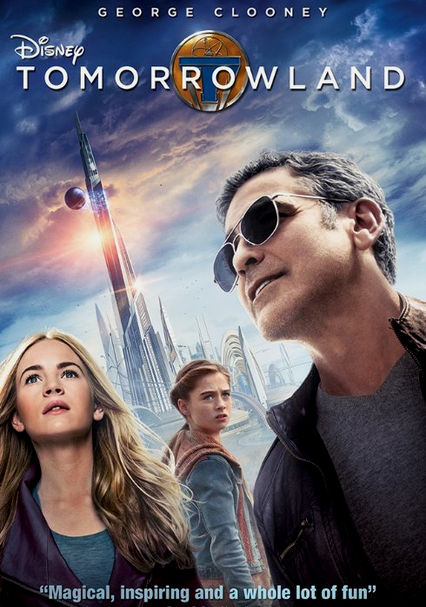 2015 PG 2h 10m Blu-ray / DVD
Sharing the ability to perceive a utopian alternate dimension known as Tomorrowland, a reclusive inventor and a relentlessly curious teen begin a perilous quest to unlock the secrets of the magical world, which holds the promise of a brighter future.

Parents need to know that Tomorrowland is a live-action Disney adventure starring George Clooney about innovators from the past and present who unite to save the world. Although it's tween friendly, the movie does contain some startlingly violent action sequences: Robotic villains shoot and kill people in several scenes, instantly disintegrating them -- sometimes disturbingly casually (the body count undermines the movie's otherwise all-ages appeal). Main characters are in near-constant peril; they're shot at, they fall from heights, they get in furious hand-to-hand fights, and more. One significant character appears to die, and another actually does, in a sad scene. Language includes insults like "idiot" and "stupid," plus "damn," "hell," and some cut-off phrases like "son of a!" While there's no substance use or racy content, there is a whole lot of consumerism, primarily due to the nonstop Disney references (the movie's title and themes were inspired by an area of Disneyland) and the prominent presence of brands like Coke, Pepsi, iPhone, and more. Still, families will appreciate the clearly positive messages about using innovation, invention, and engineering to make the future a brighter, better place.

Young Frank has a crush on Athena; some longing looks.

Frequent explosions, chases, crashes, falls, and peril. Relentless robot soldiers kill several people with guns that disintegrate them; it's startling and happens several times, sometimes disturbingly casually. They also shoot at and try to kill the main characters. Other weapons cause fires/destruction and remove (robot) body parts. In one scene, it seems like a major character has died, but he's saved. But significant characters do die (one is particularly sad), and there's a notable body count as a result of fights/crashes/battles. Some hand-to-hand combat. Footage of riots, war, storms, nuclear bombs, and more devastation shown on TV/computer screens.

Dreamers must stick together, innovators never give up, and knowing how things work can change the world. Inspiration and invention can change the world. Curiosity and persistence are valued; optimism trumps pessimism. Life is made up of two forces (described as "wolves"): darkness and despair vs. light and hope -- the winner depends on which one you feed most (i.e. success depends on feeding light and hope).

The movie's title is inspired by a region of Disneyland/Disney World (the area with Space Mountain, the People Mover, etc.), and tons of Disney-related brands/products are featured, including the Small World ride, Star Wars memorabilia, the White Rabbit, and the song from the Carousel of Progress ("There's a Great Big Beautiful Tomorrow"), to name just a few. Other brands include Coca-Cola, Jeep, Chevy, Cadillac, iPhone, Oreo, Pepsi, Electrolux, Beeman's gum, eBay, Tesla, and Greyhound.