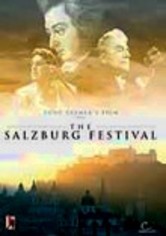 2006 NR 3h 15m DVD
Armed with unprecedented access to Austria's national film archives, filmmaker Tony Palmer tells the story of the legendary Salzburg Festival, which has played host to the world's finest musicians. Footage captures the Nazi party's heavy involvement during the height of World War II; a controversial performance of "Don Giovanni" directed by Peter Sellers in the 1990s; and interviews with Placido Domingo, Riccardo Muti, Simon Rattle and many more.