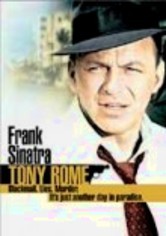 1967 NR 1h 50m DVD
Private eye Tony Rome (Frank Sinatra) escorts the daughter (Sue Lyon) of a wealthy businessman (Simon Oakland) home to avert a scandal, and things go downhill from there. Soon, he has both eyes peeled for a stolen diamond pin that other unsavory types are willing to kill for to possess. Sinatra's character had a brief vogue and appeared in a sequel, Lady in Cement. Richard Conte, Gena Rowlands and Jill St. John co-star. Gordon Douglas directs.