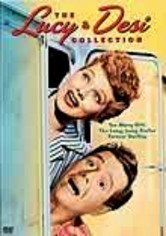 1940 NR 1h 25m DVD
When East Coast teen Consuelo "Connie" Casey (Lucille Ball) announces her plans to attend the coeducational Pottawatomie College in California, her father agrees -- but not before he secretly hires four burly football players to act as her bodyguards. Desi Arnaz, Richard Carlson, Ann Miller, Eddie Bracken and Frances Langford co-star in this rollicking romantic comedy, a frothy musical also notable for being the film on which Ball and Arnaz met.