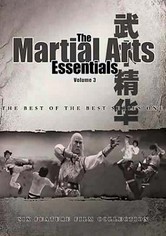 1974 NR 6h 1m DVD
This quadruple bill features three action-packed martial arts films from the 1970s and '80s, as well as a fascinating retrospective on the genre. The 1995 documentary Top Fighter includes interviews and rare footage of stars such as Bruce Lee and Jackie Chan. In Super Power, Chinese boxer Billy Chong defends his village, and "Minute" Fong wipes out his victims in 60 seconds in My Life Is on the Line. Him Pang directs, writes and stars in Call Me Dragon.