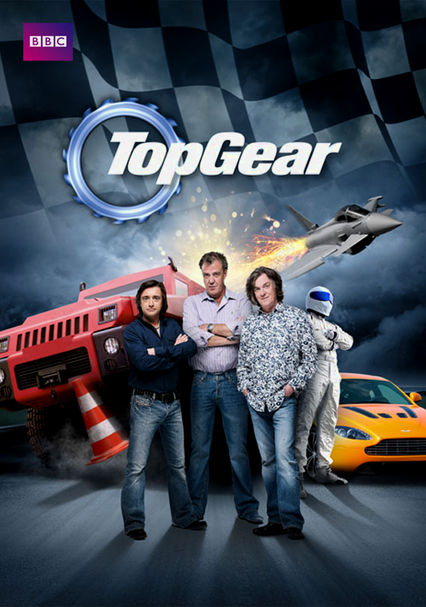 2003 NR 8 seasons
Jeremy Clarkson and his crew of car lovers test the limits of luxury vehicles -- and even wreck them, if they choose. Highlights include the segment "Star in a Reasonably Priced Car," which puts celebrities behind the wheel.

The hit automotive show shifts into overdrive for its 10th season, dreaming up an all-new assortment of challenges and putting celebrities to the test in segments such as "Star in a Reasonably Priced Car."

Series 11 introduces a new member to the team: Top Gear Stunt Man, who attempts to jump a collection of cars while driving in reverse. Reviews include the Ferrari 430 Scuderia, Audi RS6 Avant, Alfa Romeo 8C Competizione and more.

This time around, the road crew pits a powerboat against the Ferrari Daytona, tries Finnish folk racing and heads to America to test-drive some muscle cars. "Star in a Reasonably Priced Car" guests include Mark Wahlberg and Tom Jones.

Strap in for another wild ride with the 13th season of the popular automotive review show, featuring hosts Jeremy Clarkson, James May and Richard Hammond putting a Jaguar XK120 and other top-performing cars through some unusual paces.

Join goofy gearheads James May, Jeremy Clarkson and Richard Hammond as they hit the track to push the limits of a Lamborghini Gallardo Spyder, a Corvette ZR1 and other high-performance cars in another season of this hit automotive-review series.

Your favorite trio of gearheads returns for another round of the top-rated automotive program. In this series, James tests a Toyota pickup by driving it up a volcano in Iceland, and a Volkswagen Touareg is pitted against a pair of snowmobilers.

The hosts of this venerable reality series spotlighting luxury, high-performance and custom automobiles travel high and low in the show's 16th season, including trips to Norway and Albania to check out exotic machines.

Parents need to know that this one-of-a-kind British car show -- which will entertain auto enthusiasts with its hilarious blend of fact and comedy -- is pretty clean overall. "Damn" is about as strong as the language gets, and while there's no outright sexual or drinking content, one host talks about his former cigarette habit, and the guys' habit of drawing comparisons between cars' appearance and sexual/body part terms (comparing a small pink car to a scrotum, for example) is sure to make older tweens giggle. The hosts put cars through an array of stunts, some of which result in (injury-free) crashes.

A few out-of-control speed tests and some mild crashes, but no injuries.

Auto makers are referenced as the cars are reviewed.

One host occasionally refers to his nicotine addiction and the behind-the-wheel thrills he now uses as substitutes for cigarettes.