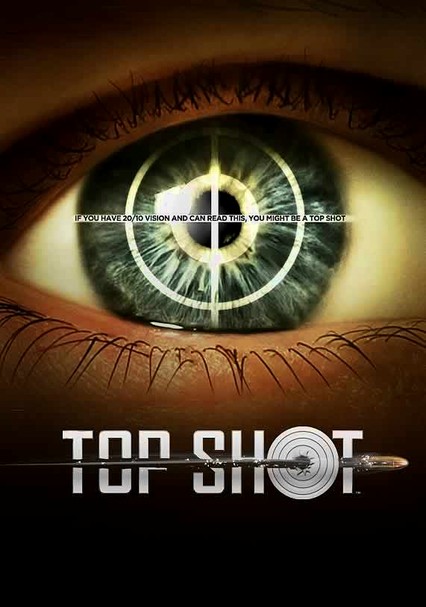 2010 NR 1 season
Talented sharpshooters vie for $100,000 in this unique reality series. Using weapons ranging from medieval crossbows to modern sniper rifles, the competitors face an array of challenges that demand their utmost concentration.

Vying for a $100,000 grand prize and the "Top Shot" title, 16 contenders from across the United States face a series of challenging sharpshooting obstacles that test their precision and focus in this History Channel reality series. Each episode -- hosted by former "Survivor" contestant Colby Donaldson -- ends with the elimination of a single competitor, leaving only the most skilled of the marksmen to reap the winnings.

Parents need to know that this reality competition features 16 skilled marksmen, all experts at shooting rifles, pistols, and other weapons, all vying to prove they are the best. It follows a standard, elimination-style competition with a variety of challenges to showcase their talents. There's some bleeped swearing, usually when people miss their shots, but otherwise very little questionable material. And while there's plenty of gunfire, it's all within the context of a target-shooting contest, so there's no violence. The issue of guns and gun ownership is sensitive to some families, so parents might want to be prepared to share their ideas on the topic.

There's lots and lots of gunfire, but it's all aimed at targets. There's no combat and no fighting.

A few words are bleeped.

Expertise in anything, even the most esoteric skills, is admirable, and these contestants have mastered a very difficult art. Their ability to hit distant targets with a wide variety of weapons deserves praise, even though few people will ever need to use these abilities. The few real applications -- long-range military shooting or hunting -- aren't really discussed. Gun ownership is a controversial issue and this show might provide a good opportunity for discussion.

Many brands of pistols and rifles are mentioned by name, including Beretta, Remington, and others.