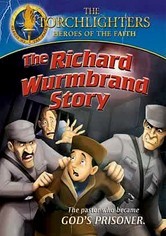 2008 NR 0h 30m DVD
Risking his liberty and his life, courageous Romanian pastor Richard Wurmbrand refuses to conform and pledge his allegiance to the communists in power in this children's animated program based on true events. After the authorities throw him in prison, Wurmbrand must draw on his deepest resources to survive and maintain his faith. A documentary about Wurmbrand and his wife is included and features interviews with their son, Mihai.