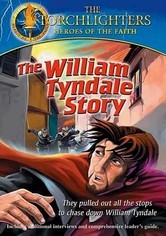 2005 NR 0h 30m DVD
After translating Bible scriptures into English for the benefit of common people -- an act King Henry VIII's government has declared illegal -- William Tyndale begins living as a fugitive. But is his devotion to bringing God's word to every man, woman and child really a crime? This animated episode of "The Torchlighters" series follows William as he spends his life in hiding, pursued by the king's bounty hunters and aided by helpful Christians.