Torture Me No More 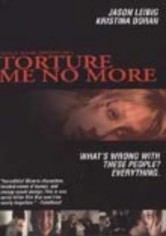 Torture Me No More

2004 NR 1h 47m DVD
Who killed the brother of Sal (Jason Liebig)? The neighbors think it's Sal himself, who's just been released from prison and returned home to reunite with his sibling. But Sal was at the pizzeria picking up an order at the time of the murder. Two cops (Anna Kepe and Joanne Bonaro) are on Sal's case, determined to send him back to jail, so he takes it upon himself to discover the true killer -- which leads him to explore a sadomasochistic world.