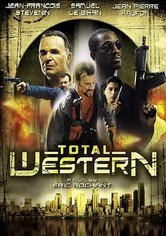 2000 NR 1h 24m DVD
Mob enforcer Gérard (Samuel Le Bihan) is the only survivor of a shoot-out during an otherwise routine drug exchange with another gang. Left holding the drugs and the cash, he realizes he's got to get out of town and so takes refuge on a farm for juvenile delinquents. But with both gangs after him, the quiet, cheese-producing reformatory is about to become a war zone. Jean-Pierre Kalfon co-stars in this homage to the spaghetti Western.