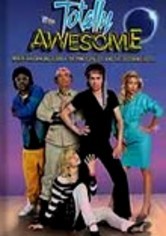 2006 NR 1h 33m DVD
In this spoof of classic 1980s flicks such as Pretty in Pink and Footloose, the Gunderson kids -- Charlie (Mikey Day), Lori (Dominique Swain) and Max (Trevor Heins) -- relocate to a new school in a new town and struggle with stereotypes and bad clichés on the first day of class. Featuring the directorial debut of Neal Brennan ("Chappelle's Show"), this comedy will take you back to the bad fashion, big hair and bodacious lingo of the '80s.

Parents need to know that this film sarcastically encourages teens to sleep with 35-year-old men. There's some comic violence when the school's teen werewolf kills the guidance counselor. The film also presents the teen years as a time of predation: both being preyed on by bullies your own age and by lascivious adults. But overall, the film has the same message as every '80s teen movie that it spoofs: Be yourself and you'll be rewarded with the girl and popularity.

In a dream sequence, Charlie imagines a woman flashing her bare breasts -- within the first three minutes of the movie. There's close, sexual, and silly dancing between teenage Lori and 35-year-old Gabriel, and later Gabriel says he's had sex with her. Yamagashi is gay and is constantly naked in front of Charlie and coming on to him. There's a lot of talk about having sex, but nothing seen.

A lot of comic violence including: a teenage werewolf kills two people graphically, Charlie gets beaten up several times by the cool kids. A girl breaks her leg and you can see the bone sticking out -- the event is watched by a group of people over and over on the VCR. The coach tells his team to kill Charlie.

Since this film makes overt what's covert in other '80s teen movies, it's hard to blame Totally Awesome for its borrowed message that encourages one 35-year-old to have sex with teenage girls. Charlie also learns to be himself and encourages others to be themselves.

Gabriel says he takes steroids. Charlie gets drunk after being humiliated at a party.