Touching the Game: The Story of the Cape Cod Baseball League 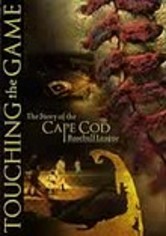 Touching the Game: The Story of the Cape Cod Baseball League

2003 NR 2 discs
Filmed in the summer of 2003, this documentary directed by Jim Carroll tracks the progress of college baseball players competing in the Cape Cod Baseball League (CCBL), the esteemed amateur league. The in-depth, captivating two-disc set features interviews with coaches, fans and Major League players and managers such as Nomar Garciaparra, Todd Helton, Frank Thomas, Buck Showalter and Jeff Bagwell, whose careers were launched in the CCBL.